People, plans and the pound: What does Brexit mean for the construction industry?

Love it or hate it, leave or remain, one thing is pretty clear: Brexit doesn’t look like anyone expected it to. With a petition calling for parliament to revoke Article 50 hitting the headlines, the country remains divided on just about every aspect of the Brexit process to date – but what will actually happen if we leave the EU? And what does this mean for the construction industry? Let’s find out.

A big concern for most industries right now is the financial impact Brexit is likely to have on the UK. With the country currently benefiting from EU funding, it’s unclear what will happen if and when this is removed. Of course, the UK is also currently contributing to the EU economy – so there could be financial benefits and drawbacks of the withdrawal to these countries too, but this is all looking pretty unstable right now.

One of the biggest monetary concerns surrounds the UK’s future appeal to investors should the withdrawal go ahead. As it stands, the volatile pound is enough to discourage anyone from putting their faith in the UK – and with its future value currently unknown, Britain’s currency remains a key part of the UK’s post-Brexit future.

Along with a decrease in cash injections into the UK economy if an exit actually goes ahead, will be a probable skills shortage. While the UK currently benefits from skilled and unskilled labour from EU nationals, this could be thrown into disarray without a deal. For the construction sector, this news is anything but welcome – and a recent survey suggests a third of EU construction workers are considering leaving the UK.

It’s not just the skills that the UK could lose, either. An eventual withdrawal, without a deal, could mean saying goodbye to the movement of free goods between the UK and the EU. In terms of materials, the UK imports more than it exports – so without a strong deal with the EU, the construction sector could be thrown into jeopardy.

In June last year, the Office for National Statistics said that the construction sector was “fragmented” – and this makes it difficult to paint any sort of clear picture with the data available. However, if a suspected skills and materials shortage becomes reality, it’s likely that supply will be unable to keep up with demand. If this happens, project costs and wage bills will undoubtedly increase and the UK will have little chance of delivering 300,000 more houses by the mid 2020s.

The UK has long since declared housing a cause for concern – but how will the government’s plans to alleviate this fare in the face of a no-deal Brexit? Obviously, the truth here will have to wait to be seen, but we can predict some probable snags should the UK leave without an agreed deal with the EU.

Without a workforce that consists of EU nationals, the UK construction industry will be in trouble – as whether higher project costs and wages are agreed or not, the need for housing simply won’t be able to be met.

In recent years, the difficulty of getting a foot on the property ladder has been a point of contention, but in the face of a no-deal Brexit, things could be about to get worse. If there are fewer houses being built, the demand will become increasingly competitive – and this means both renters and buyers could suffer. Financial criteria is likely to become more stringent, meaning that everything from guarantor loans for those looking to rent to deposit percentages and mortgage repayments could take a hit.

With the EU agreeing to extend the leave date to 22nd May if MPs approve Theresa May’s withdrawal deal, the UK might just have bought itself a little more time to find a workable solution among the chaos. Only time will tell.

This information was correct at the time of writing. 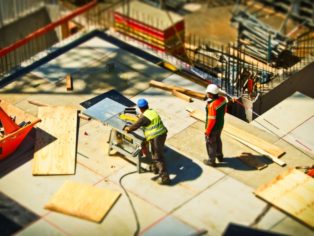 Image by Michael Gaida from Pixabay