Ambitious plans for up to 2,300 homes and one of London’s most stunning parks on the site of the £6bn Meridian Water scheme have been submitted by Enfield Council.

The application which aims to create a vibrant riverside community is the largest ever submitted to the local authority and has been accompanied by a second application which sets out the strategic infrastructure required to support the new homes being built.

It will also contain commercial, retail and social infrastructure along the river front, and a new three-form entry primary school as well as supporting infrastructure.

“Our proposals for Phase Two of Meridian Water will, if granted planning permission, provide thousands of homes and first-class infrastructure.

“It will play a significant part in the Council’s plans to provide thousands of new homes and jobs on the site which local residents will be the primary beneficiary of.

“Enfield Council’s corporate priority is to provide much needed housing and jobs for local people, growing the local economy and enhancing our local communities.”

Enfield Council’s flagship development continues to gain momentum following the recent announcement of Galliford Try Partnerships as the development partner for the delivery of the first 725 homes at Meridian One (part of Phase 1). The new homes will be delivered around the new Meridian Water train station, which opened in June and will serve up to four million rail passengers a year.

The search for a new developer for Meridian Two at Leeside Road has also started, which will form part of the Phase 2 site. The scheme, if granted planning permission, will deliver circa 250 affordable homes with workspace on the lower floors, earmarked to bring makers and creators to the area.

A bid has also been made for £156 million of Housing Infrastructure Fund cash from the government, which if agreed will help fund the first phases of strategic infrastructure works in Meridian Water as well as a more frequent rail service through the new station.

The application is currently going through the validation process and once this has been completed interested parties will be able to view and comment on the proposals at https://new.enfield.gov.uk/services/planning/the-planning-register/.

Enfield Council’s Planning Committee will decide in accordance with its statutory duties whether to grant the application planning permission. 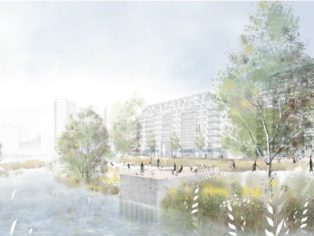