A derelict Tyneside site that has laid dormant for more than 20 years is set to be rejuvenated by the creation of 59 affordable homes.

Regeneration specialist, Vistry Partnerships North East, has been given planning permission to build on land adjacent to Maria Street, in Benwell, by Newcastle City Council and construction is expected to begin in April.

It will work, once again, with Riverside, one of the largest social housing providers in the UK, to help meet the needs of the local neighbourhood, providing affordable housing for social rent in the heart of the Benwell community. The scheme, made possible through a £4m grant from Homes England.

Lisa Hogarth, Assistant Director for Development and Growth at Riverside, said: “With the government’s target to create a million new homes over the next five years, finding ways to deliver on challenging sites is to become ever more important and we are delighted to be working with Vistry to find ways to make this possible.”

Originally occupied by traditional terraced homes, the site was cleared in the late 1990’s and since then multiple proposals and projected schemes have fallen away due to the challenges of devising a viable development.

The issues include low market values in the area, a sloping site, old mine workings, the need for multiple live services to be moved, restrictive covenants and the necessity to maintain rear access to surrounding properties during all operations. Over the years, these have proved to be costly challenges which other developers that showed interest in the site could not sustain.

However, Vistry Partnerships’ considerable experience and expertise in operating as a hybrid developer / contractor with public sector clients, paved the way for a partnership deal which maximised the site’s development potential to provide affordable housing.

“A lot of developers are involved in regeneration, but this is sleeves rolled up, knees deep regeneration.” Says Andrew Rennie, Development Director with Vistry Partnerships North East. “By adopting a creative approach and working in partnership with bodies such as Homes England, local authorities and specialist housing providers, sites that have been long overlooked – perhaps deemed to be too costly or complicated – can be rethought and regenerated, delivering successful outcomes for all involved.

“We have an exceptional land team with expertise in highlighting opportunities and finding ways to realise this potential – by facing down the challenges posed by complex brownfield sites. Being able to create much needed, high quality and affordable new homes on this site in the West End of Newcastle, unused for over two decades, is just another example of this and we very much welcome the opportunity to work with Riverside once again.”

Vistry and Riverside are also working in partnership on the former Ayton school site in Washington which will result in the delivery of 56 homes, 50% of which will be shared ownership. The site has proved challenging due to its history as a quarry, however Vistry has developed a successful alternative strategy working closely with Sunderland City Council that has resulted in far more homes being delivered on the site than originally anticipated.

Vistry is also working on the construction of a 64 apartment Extra Care facility, in Tynemouth, which is close to completion on a site to which access – via narrow residential streets – was a huge inhibitor. However, by agreeing a licence for the use of a strip of unused land adjacent to Tynemouth Community Fire Station, the developer was able to create a much improved access, which allowed construction traffic to reach the site from the main road and allayed both residents and planning officials fears of traffic safety and parking issues on neighbouring streets during the build. 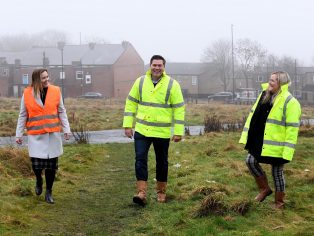