Redrow has acquired 13 acres of land in the village of Lowton, Greater Manchester, as it looks to increase its land holdings in 2021.

With planning permission in place for 117 new homes, work on the new development – named Oakwood Fields – is set to begin later this month.

Situated between Wigan and Warrington, Lowton is a prime village setting within easy reach of nearby towns, and Redrow’s Lancashire division is targeting further land acquisitions in the area.

“Our new site in Lowton is a great location for home buyers, situated a similar distance to both of the major northern hubs of Liverpool and Manchester. It will deliver over 100 new homes, the first of which will be completed towards the middle of 2022.

“We’re activity seeking further land in this area, and stretching as far south as the M56 corridor, including all areas of Greater Manchester, Merseyside and Warrington, as we see these are key locations with a high demand for new homes.”

Oakwood Fields will benefit from a semi-rural setting on the edge of Lowton, off Bainbridge Avenue.

Redrow’s plans include a mix of three and four-bedroom homes, with open plan layouts and flexible living spaces to suit a range of lifestyles including those who work from home.

Areas of open space will be created around the development while footpaths for walking and cycling will connect future residents to the open land to the north and east, as well as the playing fields to the south.

An existing watercourse will also be enhanced to create new wildlife habitats and provide an attractive landscaped feature running through the site, with a new footbridge being built as part of the footpath network.

As part of the planning agreement, Redrow is contributing almost £175,000 towards secondary education provision and around £130,000 for new improvements at local play areas, including £20,000 for the Pond Street play area and almost £110,000 for Pennington Flash Country Park.

Close to the A580 East Lancs Road, and just a short drive to the M6 / M62 Croft Interchange, the location is ideal for commuters travelling across the North West. Newton-le-Willows Station is three miles away with direct trains to Liverpool, Manchester, Chester and Leeds.

Show homes are due to open in spring 2022, when the first homes will also go on sale. 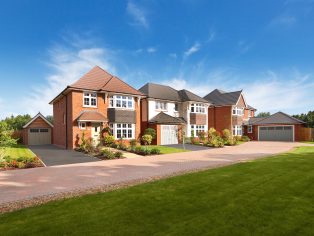 An example image of Redrow’s homes