Tolent has announced its recent contract win at Kirkstall Forge, where the team will build the site’s first residential phase, with the contract initially delivering the construction of two prototype houses.

Led by CEG, Kirkstall Forge is a £400 million project in Leeds that will see over 1,000 new homes and 400,000 sq ft of offices, retail, leisure and community spaces being developed.

The two prototype houses will be completed this summer and, once finished, members of CEG’s design team will move into the three and five-bed homes and test out the living experience.

Following their feedback, improvements will be made to finesse the final product before continuing with the first phase of 112 contemporary homes, which were designed by Stirling Prize winner Feilden Clegg Bradley Studios.

“This is another great win for the team which really shows the depth of experience and expertise we have as a national construction firm.

“With such a significant and visionary project that is already winning awards, we’re looking forward to being a part of this legacy for Leeds as well as the innovative prototype housing which is something new for us.”

“This innovative way of delivering prototype housing follows the attention to detail we have paid to everything we are delivering at Kirkstall Forge.

“By testing every detail we can ensure we best complement Feilden Clegg Bradley Studios’ inspiring design, which maximises the acres of green space and waterfront opportunity.”

CEG’s decision to ensure Kirkstall Forge is ‘Different by Design’ has paid off to date; with the opening of a new railway station connecting this development site to Leeds City Centre in just six minutes, followed swiftly by a 110,000 sq ft office development which was 90% let less than a year from completion, securing the prestigious British Council of Offices best UK ‘Commercial Workplace’ award.

Tolent, a north-east based national contractor, has been working across the Leeds and wider Yorkshire area since 1990, delivering a variety of contracts from industrial, leisure and more recently student accommodation. 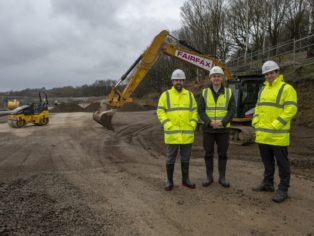