Urban Catalyst, a developer specialising in mixed-use and large-scale regeneration projects, has announced one of the world’s foremost authorities on climate science as its chief sustainability adviser, as the business looks to respond to growing concerns about the link between environmental issues such as air quality and public health.

Professor Trevor Davies has been Director of the Climatic Research Unit at the University of East Anglia (UEA) and was a driving force behind the establishment of the Tyndall Centre for Climate Change Research where he was Director of International Development. The Tyndall Centre is headquartered at UEA, and includes the universities of Cardiff, Manchester, Newcastle, Sussex as well as Fudan University in Shanghai, China, where Professor Davies was Distinguished Professor.

Professor Davies will not receive any financial benefits in his role as sustainability adviser to Urban Catalyst.

Sustainable place-making that promotes healthy living was already a key focus for the developer before Professor Davies’ appointment. However, with lockdown driving global support for a green recovery, Urban Catalyst is bringing outside academic expertise to better inform its current and future developments.

The £1bn Purfleet-on-Thames regeneration, which Urban Catalyst is delivering jointly with Swan Housing Association and in partnership with Thurrock Council, uses a number of design features to minimise car use and support pedestrians and cyclists. These include:

The focus on health and wellbeing at Purfleet-on-Thames led Urban Catalyst to become a member of the NHS Healthy New Towns Network, alongside major companies and organisations such as FTSE-100 property giant British Land, leading housing association Peabody and listed housebuilder Redrow. It will also form part of the wider green growth plan across the entire Thames Estuary.

Ken Dytor, executive chairman of Urban Catalyst, said: “There has never been a more opportune time to push property development in a direction that is both good for our planet and our wellbeing. People are realising how interlinked environmental and public health issues are in lockdown and already we are seeing more and more cities push ahead to make themselves greener and cleaner.

“Creating places that promote sustainable and healthy living has always been our aim and by having Professor Davies onboard as an adviser we hope to benefit from his immense expertise and knowledge and find real world applications for his research and long-standing interest in carbon reduction to our developments.”

Professor Trevor Davies, deputy director at the Tyndall Centre for Climate Change Research, said: “Sustainability has fallen up and down the agenda for the past few decades but there is now a clear potential for building on the widespread change in attitudes during the pandemic. Lockdown has made many realise the negative effects we have on our environment as a species and in turn how that impacts our own health.

“I will be working closely with Urban Catalyst to see how use of technology – both at a large-scale but also at a more granular level – combined with intelligent urban design can create places that are more sustainable, resilient and healthier, and I am delighted to have been appointed as the firm’s chief sustainability adviser.” 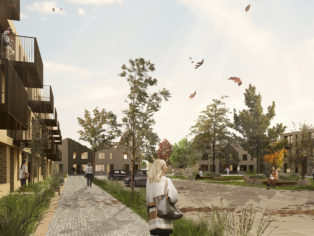