GreenBlue Urban looks at how the appropriate specification of Sustainable Urban Drainage Systems (SuDS) can add tangible value to developments, beyond flood mitigation.

Using Sustainable Drainage features calls on developers, designers, and planners to adopt a new way of thinking, and that can cause some level of resistance. However, when you look into it, sustainable drainage is not very far removed from existing civil engineering principles. What does civil engineering do? It provides answers to problems. In this case, the problem of what to do with excess water.

Traditionally, drainage engineers have turned to ‘grey engineering’ solutions, employing gravity to transport water via underground pipes to attenuation tanks or possibly a watercourse. The hard engineering used is pipes and tanks. Green engineering or Green Infrastructure (GI) provides alternative solutions to the same problem. It channels excess water away from properties or land to a place where it can be stored harmlessly until it moves on naturally. That is the key word: naturally.

Sustainability means replacing pipes and tanks with structures that mimic nature. It may take a little more thought to design a system that includes swales, rain gardens and tree pits. But that is what turns ‘boring’ drainage design into something more rewarding; something that adds to the value of a new development for potential purchasers – if it’s done right, of course.

The pressure on land for both new developments and in built-up areas is such that reducing the footprint of a SuDS/LID (Low impact development) scheme is a major factor in the design and delivery of SuDS. Components that intercept stormwater and slow the flow before it reaches a final attenuation or infiltration point reduce the amount of land required for the scheme. This increases the return on the developer’s investment in the land and, given that well designed SuDS offer additional benefits of amenity and biodiversity, properties protected by SuDS can attract a higher premium. Indeed, some housebuilders have advertised the use of SuDS as a selling point.

Deciding which SuDS features to employ and how to combine them to create an effective solution is where engineers can complement their engineering problem-solving skills with a creative angle. The engineer’s drive to build a workable, successful solution can be satisfied by using a hydraulic model to provide the reassurances the regulator demands. At the design stage, the model demonstrates the effects that different SuDS features might have on a given site, especially at times of peak flow. It also allows the engineer to model different approaches and ‘optionee’ alternative, creative solutions.

Drainage engineers who rise to the challenge and become good at SuDS design prove their worth to developers time and again. Engineers who embrace GI tend to develop a more creative approach to solving problems, often becoming SuDS champions, and earning themselves valuable competitive advantage into the bargain.

SuDS systems can work on practically any scale; from plot-level components like rainwater harvesting and green roofs, to very large schemes that include several SuDS systems working together. The impressive scheme in the Grangetown area of Cardiff is an excellent example.

What options are available? Well, not all SuDS interventions have to be huge. Small scale features are possible with systems such as bioretention rain gardens that captures and cleans storm water and provides amenity and biodiversity to new and existing spaces. The modular nature of these systems means that they can be used on a single plot as a ‘microSuDS’ or combined to provide effective flood mitigation on highways or retrofitted into urban environments.

The value of microSuDS close to the source of the rainwater means that there is less of an impact if there should be an issue. When the capacity of a single water harvester is exceeded, there is much less risk of harm than, say, a large bioretention pond overflowing. What is more, combining microSuDS with other SuDS structures greatly reduces the volume of water that needs to be attenuated. So, it’s a win-win for any developer who takes a creative approach proposed by a drainage engineer who ‘gets SuDS’.

Whichever route is chosen, putting nature at the core of your drainage design strategy is key to adding value to development projects. The solutions should not be restricted to holes in the ground – trees and green infrastructure play an important role in addressing flood risk. 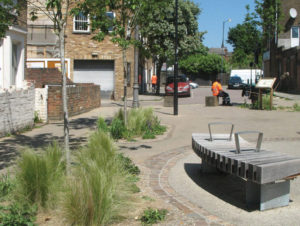 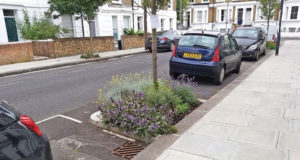 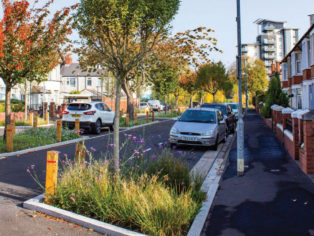