Roofing slates from Welsh Slate feature on the Duchy of Cornwall’s Nansledan development.

As work continues at Nansledan – the Duchy of Cornwall’s award-winning 218-hectare mixed-use urban extension to Newquay – Welsh slates are continuing to make their mark.

Hundreds of Welsh Slate’s Penrhyn Heather Blues in two sizes – 500mm x 300mm and 400mm x 250mm – are being installed on the roofs, and as vertical slating on window bays and under-window panels, by a pair of specialist contractors for two of the scheme’s three housebuilder developers.

Horizon Roofing, based in Redruth, has been installing the Welsh slates for housebuilder CG Fry and Son, while Wessex Slate and Tile Roofing Services, based in Indian Queens, has been doing the same for Wain Homes.

The Welsh slates were one of the material options specified by the scheme’s master planners, ADAM Architecture, in order to meet the Duchy’s requirements to use local materials wherever possible and particularly those which are compatible with the local Cornish vernacular.

Although they have been used on a mixture of houses and apartments at Nansledan, the roof pitches have been designed in a traditional way and to accommodate materials such as slate.

As most Cornish vernacular buildings are simple volumes with simple roofs, the Pattern Book for Nansledan reinforces an approach which minimises the need for special connections, although they do occasionally happen.

The vision for Nansledan evolved through extensive public consultation, culminating in an Enquiry by Design exercise hosted by The Prince’s Foundation in 2004. Detailed planning permission for the first phase was granted in 2012, and construction started in early 2014.

Over time, Nansledan will evolve into a community of up to 3,700 homes, with its own high street, primary school, social and public spaces, green infrastructure and other facilities. Nansledan is already home to some 30 local businesses and has quickly become a sought-after commercial location.

Architecturally, the development draws upon local vernacular styles, capturing the spirit of Newquay’s urban fabric while remaining unafraid to reinterpret, and supported by the Newquay Pattern Book and a Building Code.

The masterplan at Nansledan was developed by ADAM Architecture using a wide range of well-tested, sustainable traditional urban design principles overlaid with a contemporary view to how things will develop in terms of climate and energy use.

Traditionally designed and constructed houses have been proved to stand the test of time for hundreds of years and the traditional materials used at Nansledan have tended to age well, often looking better as they age.

ADAM Architecture director Hugh Petter, who is Nansledan’s masterplanner and coordinating architect, said: “Using Welsh Slate aides the sustainability objective, as a reasonably local, long-lasting material. The slate is also characteristic of Newquay and Cornwall, as such it reflects local identity, and adds to the cohesion with Newquay.”

Hugh added: “The Duchy and its developers remain happy with the quality of the product. Wherever possible, the Duchy sources its slate from the UK for sustainability reasons and Welsh Slate has provided a good solution for this.

“Their finished appearance was compatible with the character of Cornish vernacular architecture, and the other local materials that have been specified across the site. The Welsh Slate has been found to be best-suited for larger houses with relatively uncomplex roof shapes.”

Wessex Slate and Tile Roofing Services are two years into the current project phase, fixing the Welsh Slate with two copper clout nails to small roof areas of approximately 80m2, working with around 30 properties in a block. The specification for them is mainly cold roof space, with rafters under felt, batten and slates fixed in random width and diminishing courses. Sized slates are also used depending on availability.

Their estimator and materials co-ordinator Treve Kitchen said: “Welsh Slate is detailed on the build plans for the roofs because of its quality, performance, looks and sustainability credentials. It’s a high-quality product and very good to work with.

“Our clients, the Duchy of Cornwall, work to very clear principals and place a priority on natural, sustainable, local materials and labour, skills and craftsmanship.

“The project has been logistically challenging due to material shortages and constrictions.  Maintaining the resources required on a long-term basis whilst also servicing our other clients has also been a challenge but one we have certainly been very happy to have!”

Spencer Osborn, managing director of Horizon Roofing who have completed seven phases, said the roofs were standard in the main but solar tiles had now been introduced to some plots.

“Overall, the project is a challenge due to the intense labour requirement, but the Welsh Slate has performed perfectly well,” she added.

Nansledan won a RIBA South West Award 2021 when the judges said: “At a detailed level, painted timber boarding, render – rough and smooth, granite, hanging slate, brickwork and art-deco embellishments all combine to bring architectural variety, but the real achievement here is at the masterplan level, with a new urban settlement that shows great townscape and landscape led placemaking potential.”

It also won the category ‘Framework + Masterplan Large’ in the National Urban Design Awards 2021 and was shortlisted for the Planning Awards 2021 in two categories – Plan Making and Housing Development over 500 homes. 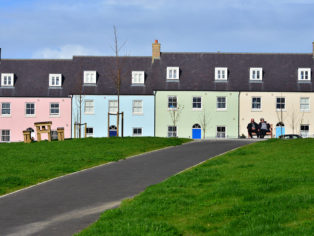